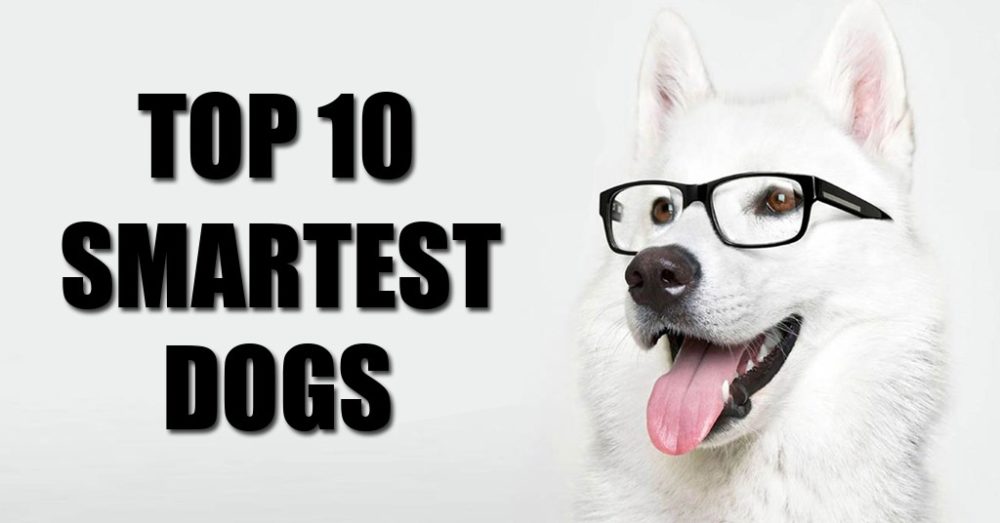 What dog breeds are smartest? You know? Dogs are not only emotional animals, but they are also extremely smart!

Which dog breeds are the world’s smartest dogs you have ever known? Do you know that dogs are not only emotional animals, but they are also extremely intelligent? There are many dogs from small to big, from white to black, they are some of the smartest animals in the world.

Generally, dogs are smart. However, there are some stand-out dogs that are very intelligent and some of them can help humans so much. They are able to understand and obey commands.

Stanley Coren Psychologist, after surveying nearly 200 dog breeds around the world, wrote these intelligent dogs in a book entitled “The Intelligence of Dogs”. The book was published in 1994 and reissue in 2006. That is one of the best book works on the subject of the world’s smartest dogs.

However, intelligence is not all. But we will research to have a ranking on top of smartest dogs. The smartest dog ranking is based on the ability to receive and process information of each dog.

What makes the world’s smartest dogs?

Coren Psychologist has evaluated the intelligence level of dog breeds based on natural instincts, adaptability to all their circumstances, and ability to understand their owners.

However, Mrs. Sarah Hodgson an expert on the behavior of the pet said that the smartest dogs ranking is not all. Some dogs have low ranks but they look so cute and they know how to make their owners happy and satisfied.

For example, hounds are difficult dogs to absorb issues around them, but they have a special sense of sight and smell. Or, like Terrier dogs, they don’t have a good orientation ability, but they have excellent hearing.

Signs of a smart dog

Do dogs have IQs?

In fact, this is an issue that still causes a lot of concerns for many people, especially experts in the field of dog research. As Mrs. Hodgson explained above, IQ is not all and it really depends on many factors such as reaction, good observation, and acumen.

Coren presented a book saying that you can test your dog’s IQ based on real analysis. For example, if your dog learns a new command after training less than 5 times, you can see your dog has the same intelligence as the genius Einsteins.

This issue has not been verified until now. But there is research showing that bigger dogs may be more intelligent than smaller dogs.

If you look at the list of nearly 200 smartest dog breeds in the world listed by Coren, then you can easily recognize that Papillon is the smallest dog.

Psychologist Coren used to write a headline on Today’s Psychology newspaper “Are big dogs smarter than small dogs?”. Drawing from a study from earlier of the year. Mr. Coren shared that: “Study data was taken from 1888 dogs and they gave an unclear result. However, there was an important thing that big dogs tend to be able to remember longer than small dogs.”

Even so, small dogs have outstanding abilities such as keeping calm, not facing enemies…

DachshundBonus.com will introduce you top 10 smartest dogs in the world according to the analysis and ranking of psychologist Coren.

This is the leading dog breed in the ranking of the smartest dogs according to the analysis of Stanley Coren. Border Collies are herding dogs that originated in England.

They have a special ability that is learning a new command with less than 5 times of practice and their obedience reaches 95%.

The Border Collie is also ranked as one of the 20 best friends for children and household pets.

The Poodle is an impressive dog thanks to its special coat. This long-legged friend is considered as a fashionista as many owners brought this dog breed to many dog shows. Besides, this dog breed is also healthy and especially it’s so intelligent and talented.

The Poodles are hypoallergenic dog breeds, that’s why they are beloved by many families around the world. This dog is ranked 2nd in the smartest dogs ranking of Coren.

German Shepherd dogs are very obedient and they always obey their owner’s orders. That’s these big dogs are usually trained as police dogs, hunting dogs, service dogs, and rescue dogs. Thanks to this feature, they are ranked one of the top smartest dogs.

Golden Retriever is very active and intelligent. In particular, they are extremely like to play a game of throwing a ball into the air and run to pick up it.

This lovely pooch is one of the smartest dogs in the world that is owned by many families around the world. They are also known as hunting dogs or called Retriever dogs.

This dog breed appeared in the late 19th century, was brought home by a German collector named Louis Dobermann, he took care of the dog as a pet and they become close friends.

Doberman Pinscher dogs are very brave, they almost fear nothing.  In addition, they can also protect and play safely with children. This dog breed is also ranked in the 35 best big dog breeds and it is ideal for those who want to own an impressive pet.

Shetland Sheepdog is one of medium size dogs, this dog breed is smaller than the Collies. This pooch is very famous and known as a sheepdog, it is also agile and obedient.

Shetland Sheepdogs tend to bark and herd to protect sheep and cattle effectively.

The Papillon is not a medium dog breed, but it has gone to the top 10 of the smartest dogs.

According to the American Dog Club, it has been noted that the Papillon dog usually wins top prizes in dog agility competitions.

In addition, the name of Papillon means “butterfly” in French, it refers to the features of the ears, they look like butterfly wings.

These big four-legged friends are often trained to be professional dogs. They are able to fight well and they can withstand skin injuries.

Rottweiler is one of the strong and intelligent dog breed, with a big appearance that always give us a sense of trust and security.

This is a cattle dog breed from Australia. They are very intelligent and not only that, but Australian Cattle Dog also has great endurance, ability to help herders achieve high efficiency at work.

It is also ranked top 20 dog breeds with the fewest health problems.

Above are the top 10 world’s smartest dogs. If you intend to own a dog that is both loyal and easy to train, consider choosing one of these breeds. Certainly, they will not disappoint you.

Dachshund dogs are also known as the famous Wiener, Doxie, or hotdog. This fun-lovely pooch has a long body, short legs. In addition, this dog breed also has flappy ears and a curved tail.

Although Dachshund’s intelligence ranking is not high, just 49. This dog breed still knows how to make its owner feel happy with funny and naughty actions. My dachshund dog Bonus always makes me laugh every day, and I think she loves to do that.

You may also like to read: IQ Of Dachshunds And Amazing Facts