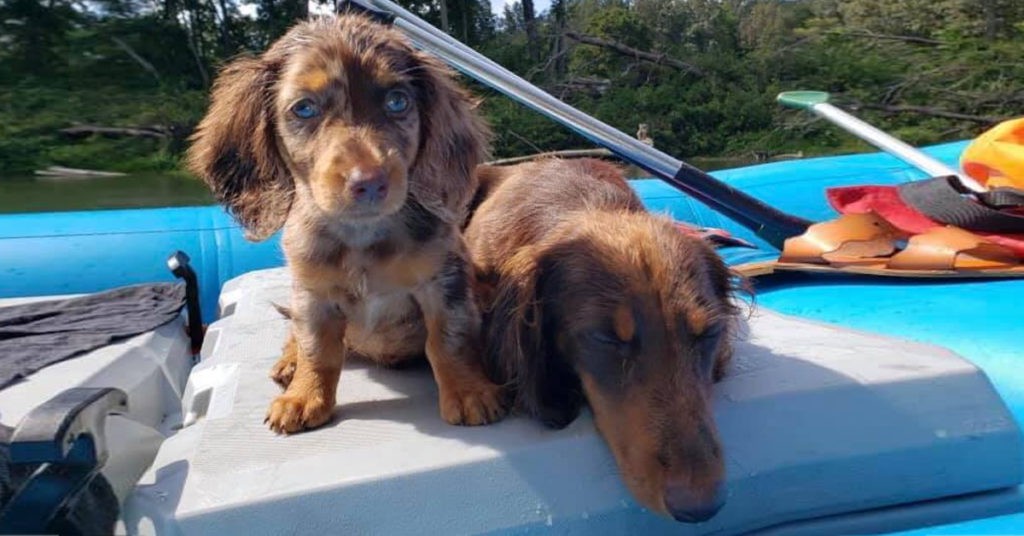 Dachshunds are dogs with strange bodies, if you see them for the first time you will feel a bit confused because of the imbalance of their body parts. Their bodies are quite long, on the contrary, their four legs are quite short. When compared to the body length, it is much shorter. Because of such physical characteristics, they are called sausage.

At first, this breed is usually used for hunting, their bodies were quite suitable. can burrow deep into the cave to catch rabbits, mice, and so on. Thanks to their small body, they do this job so well.

In additions, they have a quite long head with deeply sunken abdominals, their chest muscles are large and extremely toned. Moreover, their eyes are slightly protruding, the ears are drooping, make them look extremely cute.

Dachshund dogs are divided into 3 basic types and they mostly differ only in body size. This is also the basis for you to choose which breed you should buy.

Standard Dachshund has a height of about 30-35 cm and weighs 9-15kg when mature.

Miniature Dachshund (small): This is a hybrid Dachshund, they are the result of a purebred Dachshund with the German Spaniel, so they are slightly smaller in size with a height of about 20-25 cm and a weight of 4-5 kg.

Toy Dachshund (toys): Once fully grew, they only weigh about 15-20 cm and the weight is quite light only about 3.5 kg. Because of their small size, they are known as the mini Dachshund. These dogs were bred from purebred Dachshunds with Terriers and Schnauzers.

The Fur And The Color

Thanks to the coat of each baby, the experts have analyzed and divided into 3 basic types of dogs:

Most of the dogs’ fur is quite smooth and shiny. Also, they are known as monochrome dogs. Because the color of the hair on their body is almost black or bronze brown. Parts such as the muzzle, tummy and 4 legs are brighter, yellow or chestnut.

However, there are a few types that are mixed in two colors, but these are quite rare. Some basic colors such as chocolate, dark black and light brown, …

What are the personalities of a Dachshund dog?

Today the Dachshund has a much smaller body size than their ancestors. However, their personalities remain and retain their outstanding identities as they used to:

Dachshund puppies are often enjoyed being walked out, and they especially hate being kept indoors for too long, especially in tight spaces. They also enjoy digging sand and playing frisbee, they also enjoy hunting small animals.

Besides, if you do not chain them or look after them, the possibility that they will run away from home will happen often. Besides, Dachshunds barked loudly even though their bodies were extremely small.

Braveness, strength and being quite shy

Because this dog has an ancient origin as a hunting breed, they retain their extremely brave and strong nature. They may even be ready to battle with opponents that are much larger than them. If they realize that the owner is in danger, they will quickly go to rescue.

However, they are extremely shy and even afraid of strangers. Especially they do not want non-family members to touch their bodies and their house-keeping ability is also very poor.

Loyalty and love for children

The dachshund has an extremely noble quality that is very loyal to their owners, they only worship one owner. Therefore, you should avoid raising an adult one because they will still remember the old owner and disobeying you, even expressing an opposing attitude.

If your family has young children and adopted Dachshund breeds, you will not need to worry about letting them play together. Simply because this dog is very swaddling and extremely friendly. They like to run, play or chase with the kids. However, you should still control the situation to avoid unfortunate events.

Being too stubborn and a little hard to teach

Dachshund is not a docile dog and obeys its owner. They even deliberately protested if they were not satisfied with their owner’s orders. For example, if you forbid them from entering the bedroom, in the opposite, the curious nature will make them find a way to get in, especially when you are not at home.

Because of their unpredictability, you will have a lot of difficulties in teaching and training this dog. You need to tell them who is the owner, what they are not allowed to do and the commands they need to follow.

So when they are 2-3 months old, you need to start training them. The more they grow, the more aware they are and they will become more stubborn and destructive, extremely difficult to put on the framework.