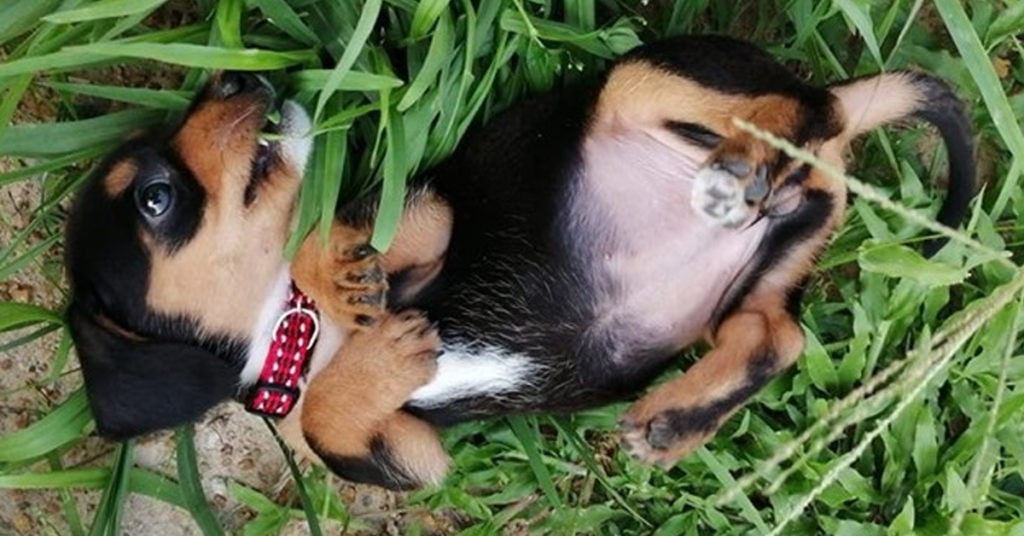 For dachshund lovers, this collection of dachshund language “dictionaries” will be the secret to help them win those puppies’ hearts quickly.

No matter what happened, you should have at least 1 puppy in your house because these four-legged friends are the most loyal to humans. To form a firm friendship, we must use our love and our loving actions to create trust in them. But first, understanding dachshund’s body language is a lesson that every owner needs to keep in mind.

Putting their tails down

When dachshunds wag their tails down and wave slowly, it means they do not know what to do. It is also a sign of the question “What do lovely dachshund puppies want me to do?”.

Putting their tails up

If the tails of these 4-legged friends are raised and wagged, it means they’re ready to do so.

When they are ready to play, the puppy eyes will stare wildly and blink.

When scared, in pain, or uncomfortable, the doxie dog will clip his tail between his hind legs. Therefore, if their tails are often in such condition, you should take them to the vet.

Going to a new place, dachshunds will feel very curious. At this point, their ears will stand up.

However, when frightened, one or both of their ears will hang down. This happens when they meet strangers or people who scare them.

Licking is a sign of stress, depression, or anger.

Showing teeth but not growling is the way dachshunds protect their territory. For example, protect your diet.

Dachshund’s eyes are also the soul’s window. When they open their eyes wide and give off a cool look, they are paying attention to you. Remember to respond to this friendly act!

Lying with their stomach up.

Feel happy when dachshunds roll and expose their stomachs in front of you because they have to trust and want to please you, so they act like that. In return for the loyalty of friends, rub their bellies.

Rubbing their face on your knees.

To attract attention, dachshunds often rub their faces on their owners’ knees. That proves they need you. Pressing your nose into your hands means they want to be pampered.

Putting their feet on your knees

If your sausage dog puts his foot on your knee, looks smug, look him in the eye and slowly give up his paws because this action means they’re complacent.

Putting up one leg

A raised leg proves that the dachshund wants to call you. Maybe it’s because they’re hungry, want to play, or just find something interesting.

Turning their back on you

To show their confidence, dachshunds will turn their backs on you.

Dachshunds shake their bodies as a way to relieve stress, such as after bathing.

This article uses photos from Dachshund Bonus Group and the photos were shared by members of the group. Thanks to all members for the shares.