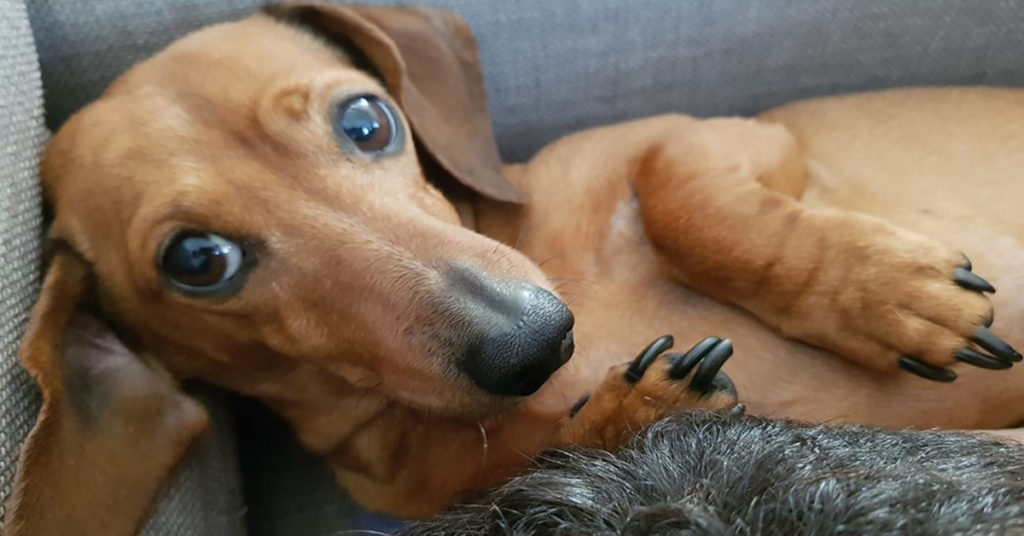 What is the reason that makes dog puppies worried about being abandoned?

There are many reasons why puppies behave problematically when staying alone. For example, he may feel depressed or simply they might not know that they are not allowed to bark, dig or chew household items. Others are unbearable when they leave their owners and become frightened. This article will give you some helpful tips to help your dachshund get rid of anxiety and insecurity when staying alone.

What could have happened?

All puppies should not be left alone for a long period of time. With dachshund dogs often worried about being abandoned, you should not leave them alone even just for a few minutes since some will probably be vandalized, some will be noisy, others will become crazy and create a riot in the house.

Rescued dachshunds are more likely to experience fear when staying away from their owners, especially during the first few weeks of moving to a new environment. Next, puppies with a shy, sensitive, and docile appearance, those dachshunds are often praised for their “great temperament” and are loved by people. They tend to quickly cling to their owner like a shadow.

The anxiety of being abandoned is more likely to happen to puppies that have moved house since they were under one-year-old, and especially dogs passed through many different owners.

How to help the dachshunds feel less fear when staying alone?

Firstly, teach your beloved puppy to get used to your absence in a short time. Following your plans, leaving the doxie dog behind in the room they usually stay, close the door and go away, after a while (less than five minutes), go back and skip the greeting with the dog. Repeating this several times, in the same manner, and at the same time of day. Step by step, increasing the amount of time your dog stays alone. If your sausage dog is annoyed, starts barking, rakes open the door, or when you come back to see him chewing on anything, next time he is alone for a shorter time. In addition, the dog’s training process should be adjusted slowly.

Keep following your plan until your dachshunds can tolerate your absence for 30 minutes without any problems. Then, try starting to leave the sausage dog alone in the room at any time and go to your daily tasks like dressing or taking the key.

Before following plans to leave your dachshund alone in the room, let your puppy get some exercise, which can lead him to walk or play games. This will give your dachshund some time to calm down.

You should feed your dachshunds before leaving, it will make them feel comfortable and fall asleep easier.

The room you leave your puppy in should be carefully selected to minimize damage. It is best to stay away from places with wires or valuable furniture. That place should also calculate how to make if the dog barking is less disturbing to the neighbors. It is important to note that your pet should be kept indoors rather than in the garden as they will feel safer.

Moreover, you can leave your dachshund at home with favorite toys attached with his favorite food which can distract his attention for a few minutes when you leave, it will also help him feel less intension, overcome the fear and gradually get used to being alone. Leave an old shirt of yours before leaving. The fact that putting your shirt in your dog’s house will help him get used to being alone easier. Some dachshunds seem to be relieved to hear the familiar sounds of a melody playing on the radio. Therefore, you can record a 30-minute conversation with your family and play it for the dog as you leave.

When you return, the greeting should be short and do not get too excited. For whatever reason, you should not be angry, yell at or punish your wiener dog. If something goes wrong, reconsider your responsibilities and if necessary, ask someone for help.

In order to deal with the situation when you going out, puppies have to feel comfortable and calm even you are not with them. The following tips could help you to create a more independent relationship between you and your dogs. It also helps to decrease the dependence of your dog puppy on you which leads to anxiety when alone.

Ignore when the puppy is trying to attract your attention. Don’t talk but also don’t scold the sausage dog at that time, don’t touch or even look at him. When you want to show interest in your pet, call him to you and cuddle him, play with him for as long as he wants. If you do so often, the doxie dog will understand that if he knows to keep quiet and try to act independently, you will notice him more. Decide on the amount of time you will pretend to ignore your dachshund and when to cuddle and play with him. This will certainly create an independent relationship rather than constantly rubbing his head, scratching him, or talking to him whenever you walk around the house.

Do not let the dachshund follow you from room to room. If you take an adult dog home, remember to train this from day one. Don’t forget to close the door when you move into another room and leave your pet alone for a few minutes until you return. When you come back, stay calm and appear aware of the dog’s presence in the room, but don’t overly show it.

Helping your dachshund identify you are about to leave with simple actions like finding a car key or wearing a coat.

If you are about to take a new dog home, first prepare for him an overnight spot in the kitchen, and don’t let him sleep in your bedroom immediately. This will prevent your puppy from being with you continuously for a long time.

Show problematic behavior as soon as you leave. The first 15 minutes were always the worst and during that time the dog was extremely uncomfortable. All the physiological signs of fear can manifest as an increase in heart rate, breathing rate, gasping for breath, drooling, excessive hyperactivity, and sometimes even urinating. The dog is always trying to follow you. They will scratch the door, scratch the carpet, nibble on the door frame, or jump up to peer out through the window. In addition, your puppy may bark, whine or howl in an attempt to convince you to come back.

After this “crazy” period, your pet may feel calm. They begin to chew on something you’ve touched earlier because they still have your smell. Furthermore, dachshunds can chew and tear these items into small pieces and then roll and roll between them. This seems to make your puppy feel like there’s a layer of your scent around him and protecting him.

Why would punishment make things worse?

Imagine what it would be like when a person came home, found messy furniture, even broke, or heard neighbors complaining of being bothered and it was all a dog’s fault. In this case, it’s easy to sympathize if the person is angry and scolded. Puppies only recognize the frustration of the owner, then they will show signs that they want to ease the owner’s mood or hope the owner will take the punishment. Unfortunately, the dog’s submissive posture (drooping ears, head low, flat, tail hanging between the legs) is often misunderstood by the owner as an expression of remorse. They often say, “There, he knows that he was wrong”.

Any punishment given after everything has ended is often ineffective. Dachshunds can only recognize their punishment for their actions if you punish them right away. As a result, your dog will not be able to relate your punishment to what he or she did before you got home, even if you led the dog to the place where they had previously destroyed.

It is not that they do not remember what they have done, it just they thought it would be reasonable if they were punished for the mistake they just made, not for what they had done hours ago.

Punishment at that time not only did not work, but it could also even make the problem worse. At this time, besides worrying about being left alone at home, your puppy will be afraid of his owner coming back.

A few other tips

If you want to raise more dogs just to keep them happy, consider again! It should not because of problems with his current dog that decided to pick another animal. Because adding a pet may not solve anything, it can make your puppy with you feel more miserable.

If your puppy show serious anxiety about leaving you or other behavioral problems, contact your veterinarian or dog trainer soon to get timely support!

Have you ever left your dachshund home alone?